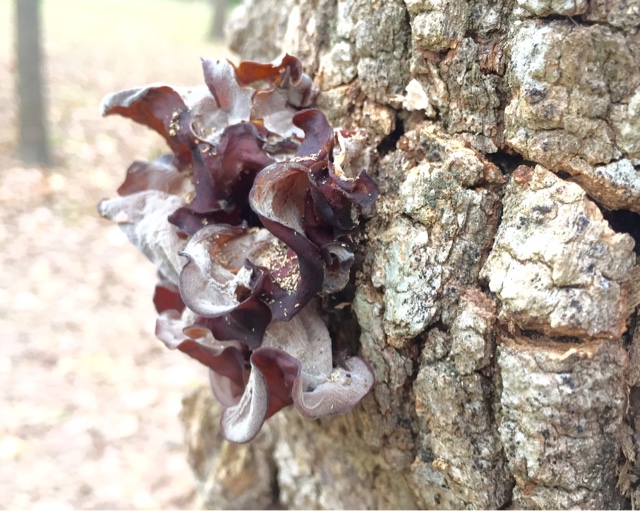 Auricularia auricula is better known as the wood ear, jelly ear, or tree ear, it also has an outdated name of jew's ear. In China it's called the black fungus, cloud fungus, black mushroom, or black jelly mushroom. It's widely used as both food and natural medicine, having anti-tumor (anti-cancer), anticoagulant, cholesterol-lowering, and hypoglycemic effects. 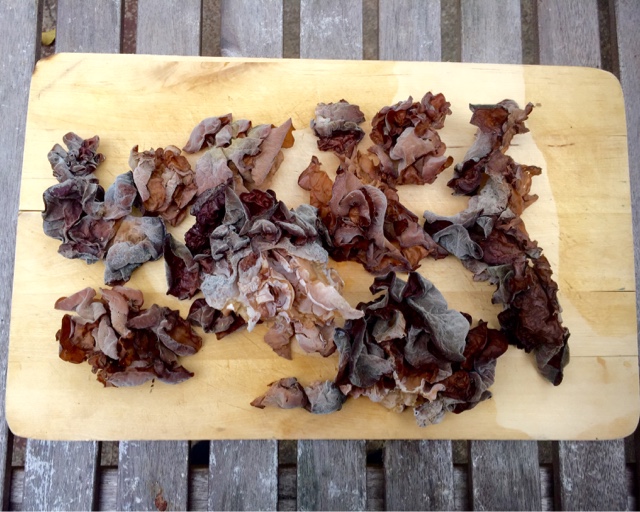 As a bonus, it's a fairly easy mushroom to identify, though there are similar looking fungi, they aren't poisonous, and many are actually edible. But, as always, it's your responsibility to make sure you are 100% positive you have a correct identification, by corroborating with several reliable sources and/or local experts.

One note of caution: because of the anticoagulant effects, it's important not to consumer wood ear if you are on blood thinning medications.

Now, on to identification and cooking tips!


Where, when and how to find wood ear mushrooms 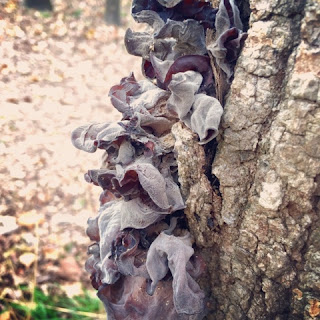 Auricularia auricula can grow anywhere in the continental US, parts of Canada and Mexico. It may also grow in Alaska, but I'm not sure. It also grows in Asia. The similar looking and closely related Auricularia polytricha is another edible Asian mushroom.

Wood ears are a cool to cold weather species, found in mid fall to early winter, and again in the early spring, and throughout the winter in southern climates. If you find a similar looking mushroom in the summer, it's probably a species of Tremella, not A. auricula.

Wood ear will only grow on wood. They can be found on living trees or dead wood, but if a live tree has wood ear on it, it's a sign that the tree is sick, most likely dying.

Wood ears are translucent, medium to dark brown, but can dry out in the wild, appearing black (like shown on the tree above). If you do find them dried out, they can be reconstituted, just like you would with any other dried mushroom. 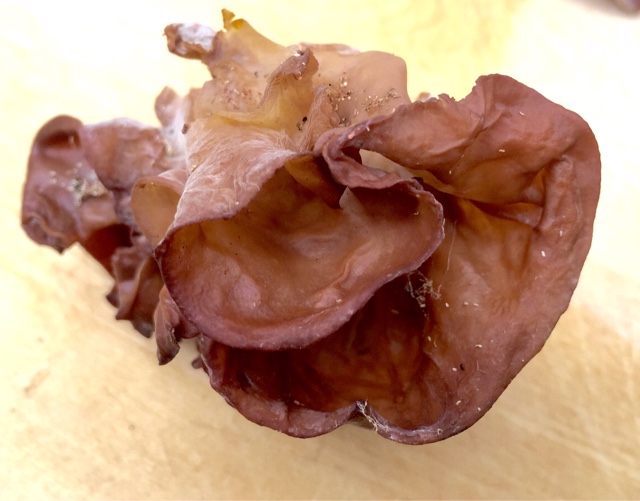 True wood ears strongly resemble ears. They are generally half-cup shapes, with a crinkly appearance on the inside. They grow in overlapping clusters, in and out of each other.

The picture above is more or less the quintessential shape, but these below are also commonly found: 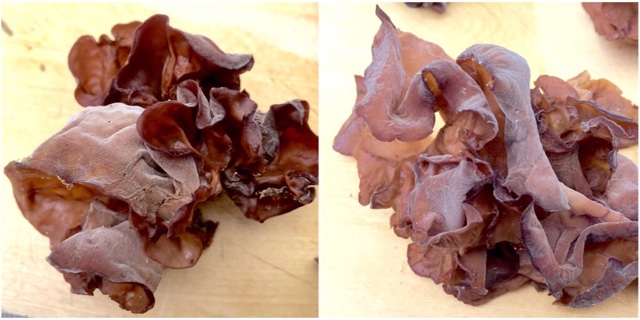 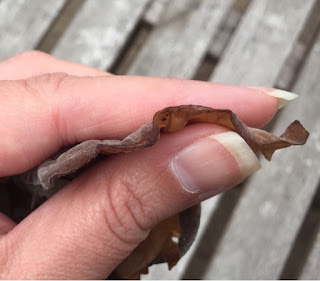 The picture on the right shows both the thin edges, and the lack of compression. Though it shouldn't compress easily, wood ear mushrooms should fold VERY easily.

If you find a mushroom which is more of an amorphous blob which compresses easily, then it's probably a Tremella.

If you find a mushroom that is non-gelatinous, and/or that you can't bend in half easily without cracking, then you have some sort of cup fungi.

Wood ear is the classic "black fungus" in hot and sour soup. If you want that crunchy texture, cut the wood ear into thin strips, like matchsticks, and dry them. Drop them into the soup still dried, and they will only partially reconstitute as the soup cooks. 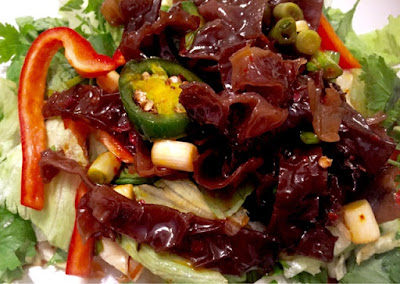 In traditional Sichuan Chinese cuisine, wood ear are also made into a mushroom salad, with a softer texture. I like them best this way. For this, you reconstitute and boil, check out my recipe here.

Wood ears are high in protein and iron, when compared to mushrooms or other vegetables. They are also low in calories, fat and carbohydrates. A cup of wood ear also has about 20% of your daily dose of vitamin B2, aka riboflavin. It's also high in vitamin K. While it's good for everyone, Vegetarians and Vegans should especially take note of the protein and iron, and those suffering from Crohn's or celiac diseases would benefit from the vitamin K.

Wood ears have been used for centuries in the East as natural medicine and medicinal food. Recently science has confirmed they have cholesterol lowering, hypoglycemic (good for controlling blood sugar), and anticoagulant effects. At one point, studies seemed to imply that wood ear was ineffective at helping to reduce or prevent tumors, but when a different chemical in the fungus was tested, it was shown to have tumor reducing and anti-cancer effects.

I'm not going to reinvent the wheel, when someone else has already done an amazing job of gathering  links to all the relevant medical information on Auricularia auricula. Please check out this article for links to the studies 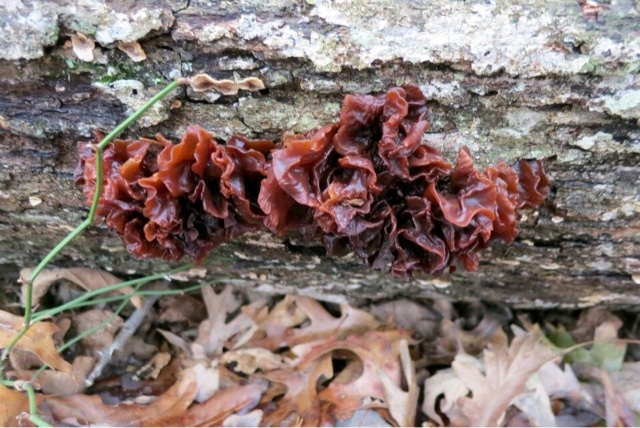 The most similar looking species you are likely to encounter is Tremella foliacea, which is also translucent, medium brown to black, gelatinous and grows in overlapping flaps on decaying wood.

Tremella foliacea has a lot more water in it, so its "squishier" , aka much easier to compress. It's also more brain shaped then ear shaped, and the individual "leaves" are thick, rather than thin at the edges.

T. foliacea is edible, and also possibly medicinal, but flavorless. Despite the disappointing taste, any confusion between the two isn't dangerous. 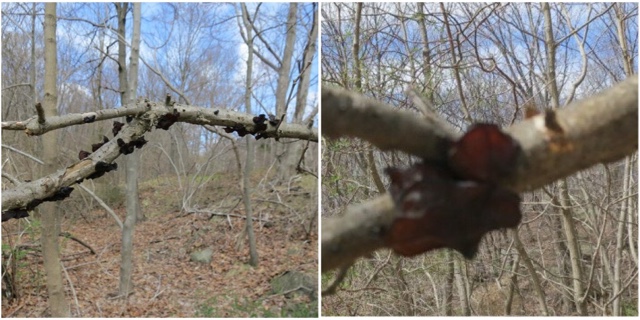 Another similar mushroom is Exidia recisa, which is sometimes called brown witches butter. It looks and feels EXACTLY like wood ear, but it's much smaller. I usually find E. recisa on small branches and sticks. It's rarely more than an inch across. (Exidia, you're my mini me!)

There's also Exidia glandulosa (formerly known as E. truncata), a larger species which looks even more like wood ear. They tend to be thicker or fatter than wood ear, without the thin edges.

And there's E. nigricans, which is more of a black slimy mass. It doesn't really form cohesive shapes, and would be hard to scrape off a branch without getting a bunch of wood mixed in.

Exidia species are also edible, and most likely medicinal, though not as medicinal as wood ear. It also tastes about the same, and has almost the same texture (its a little softer), so if you find enough of it, you should try it out. 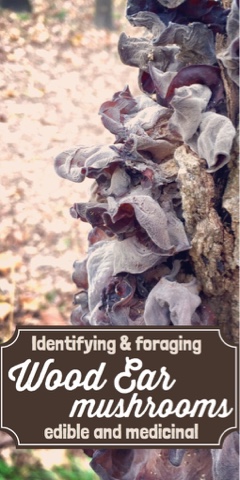 SaveSave
Posted by HenoftheWood at 4:13:00 PM