Either I somehow managed to miss the juneberry season, or it really wasn't very good this year. In April, when the flowers were blooming, I went around and ID-d a bunch of trees, doubling the number I knew of in my neighborhood. Despite double the number of trees, I actually harvested less fruit than last year, which is a shame, because I was really looking forward, and I had several recipes that I wanted to experiment with.

The birds seemed to notice the poor season as well. They striped the trees bare long before the majority of the fruit was ripe. Also, usually they stay in the upper branches, since my neighborhood has a lot of constant car and sidewalk traffic, and this leaves the low-hanging fruit for me. However, this year the birds were everywhere, even sometimes within arm's length of me, as I harvested. They also seemed to do fly-by "strikes" on the fruit--where they swooped in and pecked at a berry while continuing to fly. This meant that a lot of the fruit I could get was unusable, as it spoiled once pecked at.

Anyway, complaining aside, I got enough berries to make this dessert. It's not particularly creative, there are numerous recipes where berries (usually blueberries) are baked with brie; however, I wanted to make something a little less sweet, and completely home-made, without the preservatives and other additives found in pre-made phyllo dough or ready-to-bake crescent rolls.
Read more »
Posted by HenoftheWood at 6:30:00 PM No comments: 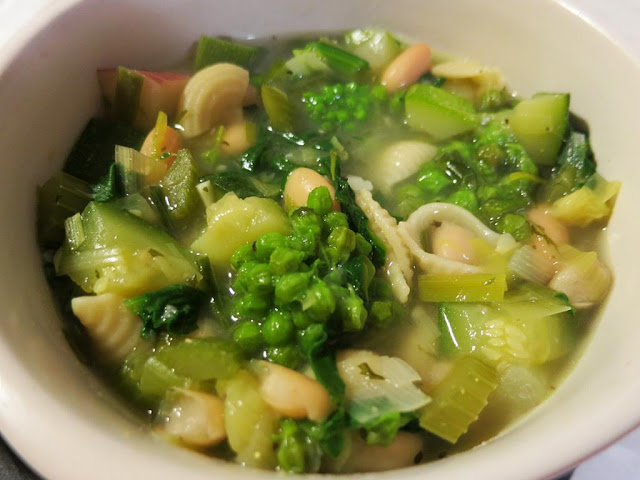 So, the season for milkweed shoots is passing, and the season for milkweed buds begin. The flowerbuds of milkweed are many people's favorite part of the plant, though I think I personally prefer the shoots. The flavor of the buds is similar to that of the shoots (a mixture of broccoli and green beans), but the texture is very much like that of over-sized broccoli florets. The buds do best with a quicker cooking than the shoots, but they should still be blanched to remove the chalky taste of the sap. 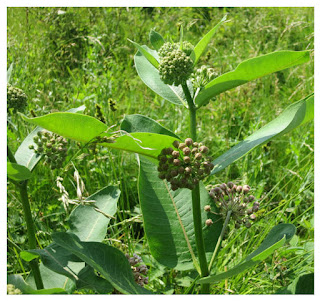 Remember, don't take all of the flower buds. I usually take one per plant. Taking more than that will rob you of the opportunity to harvest both the edible flowers and the edible seed pods later in the season. It will also prevent the milkweed from any chance of reproducing this year.

Taking the flower buds doesn't hurt or kill the individual plant, (like taking the shoot does), and thus you can harvest the buds--in moderation--from smaller patches of milkweed. 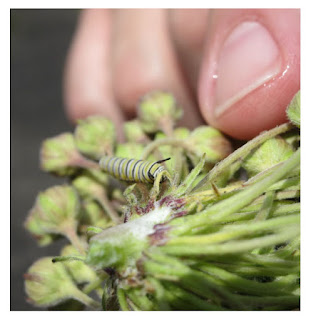 When harvesting milkweed buds, it is essential that you check for small monarch caterpillars. The milkweed family is the only food which young monarchs can eat, and they are frequently found crawling around the buds. Simply relocate them to a new home on another part of the plant. . 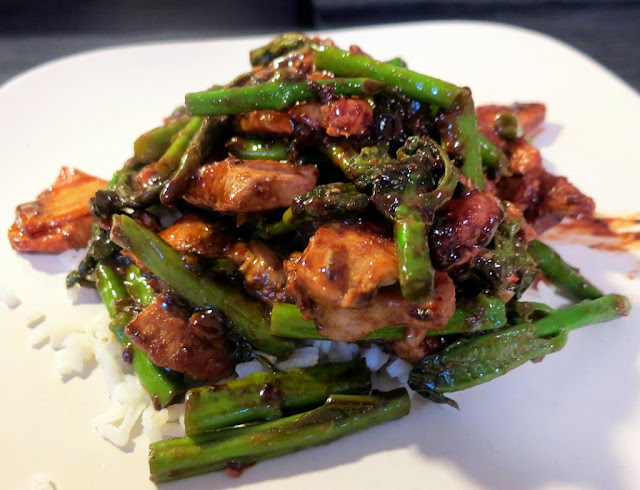 Milkweed is an extremely useful plant, producing different edible parts throughout the season, all of which are versatile vegetables. To me, the flavor of the shoots, flower buds, and the young pods is like a mix of green beans and broccoli. The shoots can be prepared in ways similar to asparagus, since they have a similar texture, but they should always be blanched first, to remove the pasty taste of the milkweed sap.

Aside from the blanching, milkweed's taste and texture are so similar to that of cultivated vegetables that it can be used in almost any recipe in your regular repertoire.

So this dish is directly stolen from an homage to Andrew Zimmern's Pork and Asparagus with Chile-Garlic Sauce from  Food & Wine magazine. You can find the original here.

I like this dish because it's fast, healthy, delicious, and doesn't require an enormous amount of cleanup. I have made some substitutions of the more exotic ingredients to fit what was in my own pantry. Toban djan is a spicy paste made from fava beans and chilies, but I didn't have any, so I used a mixture of black bean paste and sriracha. The end result is very different from Zimmern's dish, but equally tasty!