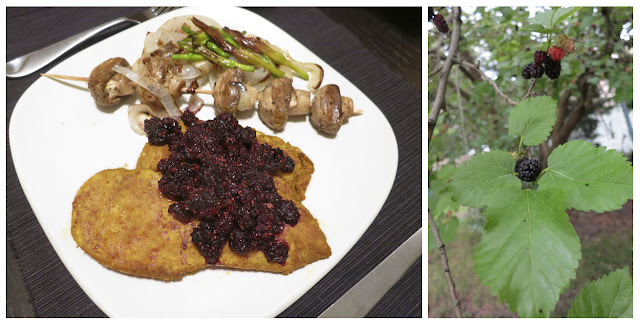 As a quick disclaimer, I would like to acknowledge that the idea for this recipe didn't originate with me. I've seen mulberry chipotle sauce posts kicking around the Internet. They appear to originate here.


Though I would usually not post something I didn't come up with on my own, I wanted to put this here since I feel I really did customize it enough to change the ending flavor. The original is a BBQ recipe, and mine is more of a Middle East fusion dish. I changed the proportions, whereas the BBQ dish is very spicy, and primarily a chipotle flavor, this dish balances the sweetness with the heat, and the flavor of the berries takes the forefront. Finally, I served mine with grilled daylilly buds, to make it a more comprehensively foraged dish.


As an alternative presentation, which would really push the Middle Eastern element, feel free to cube and kabob the chicken before grilling. Try to use the native American mulberry, or a pink hybrid, as the sauce will have a much more appealingly vibrant color. I used that fruit here, and the result was a fiercely magenta hue which contrasted nicely with the golden rub on the chicken. 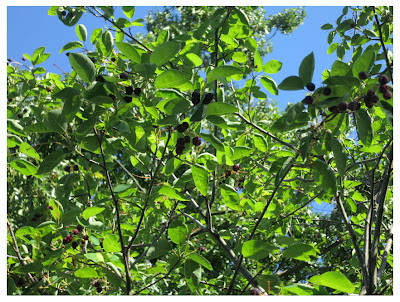 This year, the sheer abundance of berries made them impossible to ignore. For the past 3+ weeks, I have made berry pancakes, berry drinks, various breads and muffins, added berries to frozen banana "ice cream" and even made a sweet and spicy sauce with mulberries and chipotle for chicken. (I'll get around to a mulberry post soon, I promise!) 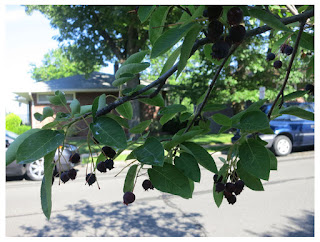 Foraging in a "Life After People" Landscape 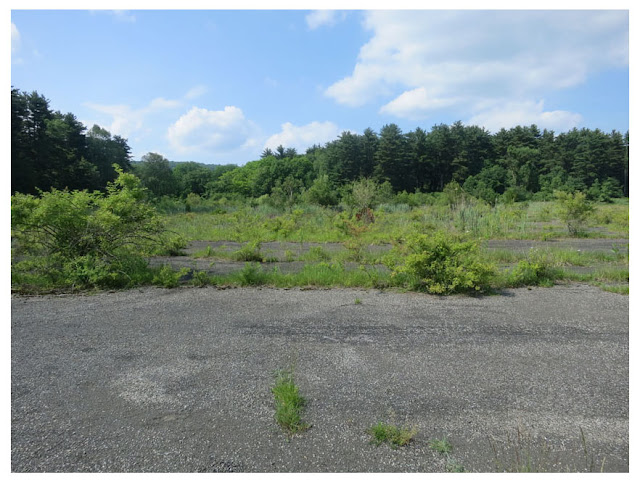 The scene above was once a parking that fit 1000 cars, as well as touring buses. It was for an outdoor tourist destination that went out of business in the 1970s. For the past 40-odd years, the forest has slowly been reclaiming its own.

Life pushes its way up through weakened seams in the concrete; decades of growth creating an organic maze of grasses, shrubs, and even small trees. After even a few yards, the waves of greenery cut off the entrance of the former lot, and it's easy to feel completely isolated even though a picnic area and a major road lie within a mile. Subtle breezes bear the fragrance of wild roses and honeysuckle. 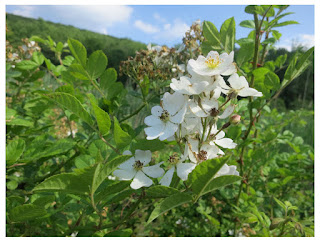 For the forager, these alleyways of pavement are like the aisles of a somewhat chaotic supermarket; stroll down one gathering clover, another for thistles, and a third will be bursting with raspberries in a month. All along the perimeter, rows of milkweed stand guard, three or more rows deep. In between them more raspberries, and bull, milk and sow thistles wait to snag the forager who ventures to gather the milkweed buds. 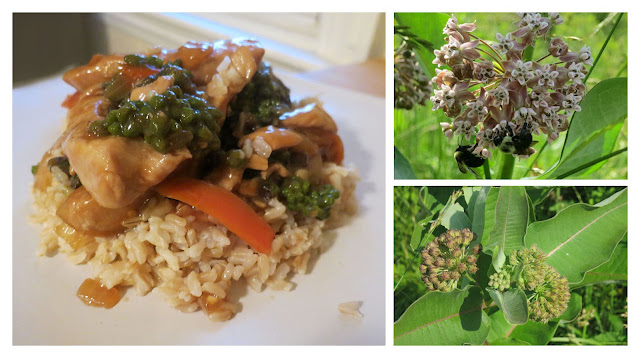 After a long day of being in the sun, hiking around foraging, I usually don't want to spend hours prepping an elaborate dinner. A quick stir-fry can be the perfect solution. Straightforward ingredients, simple, carefully chosen spices, and an exotic, wild element produce a memorable meal, one that comes together in about 30 minutes--and all in one pot!.

Milkweed buds are a great wild food source. They are generally abundant, incredibly easy to gather, and are part of a plant that will produce one vegetable after another over the course of several months. (Shoots in the early spring, buds and flowers in the early summer, and pods during the height of summer.) 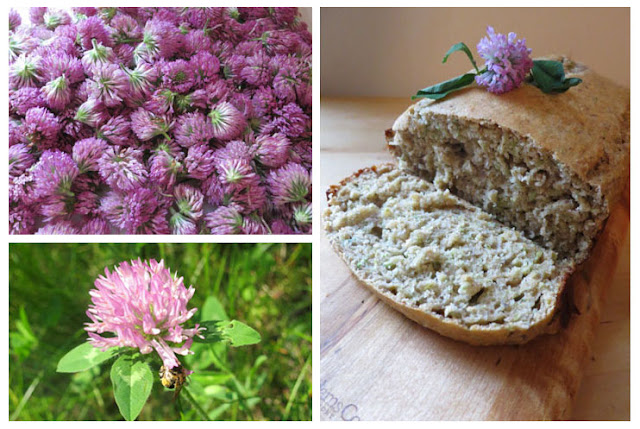 While on a tour with "Wildman" Steve Brill, we came upon a field of sweet clover, the red/purple kind; which the "Wildman" told us was very good for you. Upon tasting the flowers, I was reminded of this dandelion bread from Fat of the Land; and I knew I had to try to make a clover version--with my own small twists, of course!

I wanted to try to create a somewhat healthier version of the original. I substituted half of the white flour for whole wheat flour, but feel free to use whatever you have on hand. I also decided to use an old trick for reducing the fat of a dish, by replacing unsweetened apple sauce for the oil. The result is an almost fat-free bread--the egg still has a little fat in it. My first loaf was missing something, so the second batch got a dash of vanilla extract, which really perked it up.

There is a slightly bitter note in this bread; I would assume it comes from the green parts of the flowers, which are impossible to remove entirely. Still, it is rich, hearty and dense, with a touch of sweetness and a very pleasing texture. It tastes great with a pat of creamy butter, or toasted with a drizzle of maple syrup; but my favorite way of serving it is to add a razor thin slice of sharply-flavored cheese (I used Asiago), to top each slice of bread. 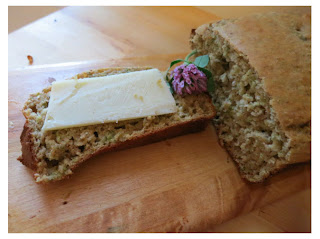 It is difficult to categorize this bread. It could be an appetizer, certainly, but it is also very nice for breakfast, brunch, or afternoon tea. And its delicious when paired with beer, so. . . However you look at it, its a tasty little anytime bread. 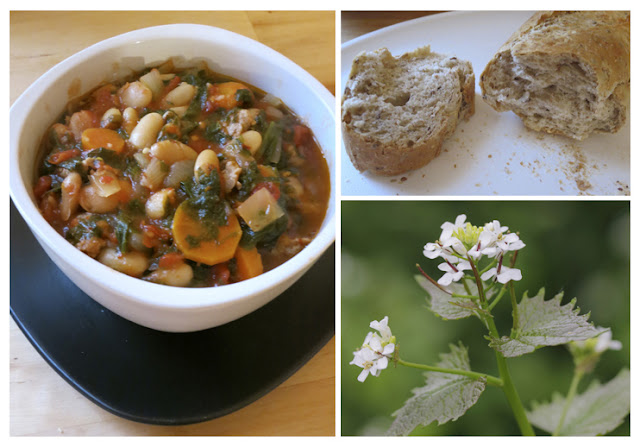 Ribollita is a rich, hearty Tuscan stew made from a variety of vegetables, beans, tomatoes, and decadently served day-old bread, which becomes saturated, breaks down, and adds a thickening agent to the broth. Top all that with a generous helping of grated parmesan, and mmmmmm! Like much Tuscan cuisine, ribollita has its origins in peasant fare, though the exact history is lost.

Warm and filling, this stew lends itself to wintry days, though I found it quite satisfying over the rainy spring afternoons we had last week. There is no set recipe, and I have borrowed from numerous sources, as well as adding my own touches. Classically, ribollita uses kale, specifically dark, purply Tuscan kale; but in this dish, the role of leafy, slightly bitter greens will be played by garlic mustard leaves. Garlic mustard efficiently does double duty here, filling the flavor profile for garlic as well.

Happy Mother's Day!
In honor of Mothers everywhere, I decided to share with you this wild version of a classic brunch food: the frittata.

Personally, I love a frittata for any occasion--or for any meal, for that matter. They are quick to whip up, pretty healthy, require minimal cleanup, and can be tossed together from whatever veggies and/or meat are left over in your fridge. They are also one of the cheapest meals you can make, since eggs are one of the most affordable protein sources in the market. And, the only way to make affordable food cheaper is to load it up with free stuff from the wild.

A frittata is really just a crustless quiche, and this recipe adapts well if you want to pour the mixture into a premade or homemade shell. I happened to have a bell pepper that wouldn't have made it much longer in the fridge, but broccoli, spinach, green beans, or any other of cultivated veggies would have done just as well--or leave them out entirely and just keep it wild.

Whatever other veggies you choose, I think keeping garlic mustard as the main ingredient is key. I really love the way the garlicy richness permeates through the egg mixture. I used leaves from the second year plant, when blanched, they are as tender as baby spinach, and far less bitter than kale. 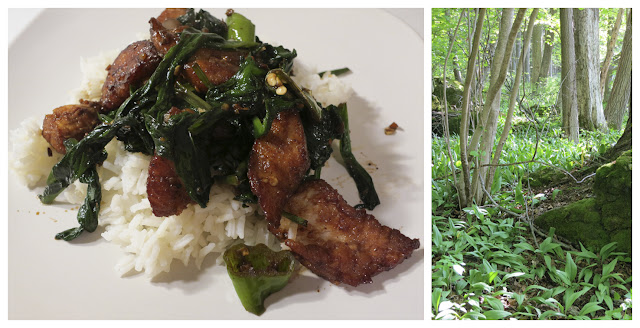 With the trees now fully leafed out, the ephemeral season of the ramp is drawing to a close. Heading out to our patch on Sunday, we found that several ramp leaves are already showing yellow discoloration at the edges. Within a week, maybe a little longer, every leaf in the patch will have wilted to brown and this delicacy can no longer be gathered.

As with any negative in nature, it's balanced by a positive. Once the leaves reach this state, they do loose a little flavor, it's true; but they can be harvested in great abundance, with impunity. As always, I entreat you not to take the bulb, (how to ID and harvest ramps), but the leaves are soon to die anyway, so you can now freely take a leaf from all the plants. Ramps only use their leaves for photosynthesis for a few short weeks before they become choked out of light; during that time, the pant stores as much energy as it can in the bulb. Now is a great time to harvest an abundance of ramps and freeze them.

With gathering set to high, it's the perfect time to make a dish which uses a lot of ramp leaves. This is actually my husband's recipe, and it is his wild interpretation of one of our favorite dishes at our favorite restaurant, Chengdu 23. This fish dish is drenched in spicy heat from the peppers, sweetness from the ramps, and the rich earthy-ness of fermented soy beans. The ramps dramatically change the character of the leek-based original, which lacks the sweet onion note of the wild version, but has a denser, more fibrous texture. To retain that element, feel free to use a mixture of both ramps and cultivated leeks.

Allium tricoccum, called sometimes wild leeks, spring onions, wood leeks, or ramson, but most commonly known as the ramp or Ramps, are one of the most sought after wild foods.

Recently "discovered" by the gourmet world, Martha Stewart, the New York Times, the Food Network, and more have just learned what foragers and people of the Appalachian mountains have known for generations. . .that Ramps are the delicacy of the onion family! 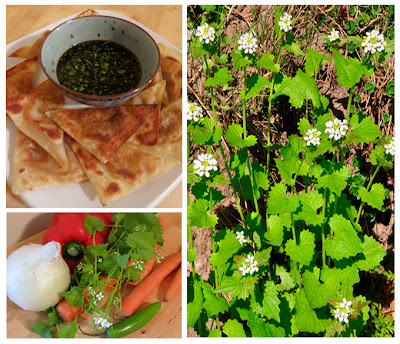 I am not lying when I say that my garlic mustard gyoza are better than any wonton/gyoza/potsticker I have had anywhere, ever! (But I might be a bit biased by creative pride)

Garlic Mustard is probably one of the easiest things to forage for, at least on the East Coast. It's pretty much everywhere, easy to identify, and has no toxic look-a-likes. It is an imported, invasive species, which is taking over and crowding out native species. You quite literally cannot over-harvest it.