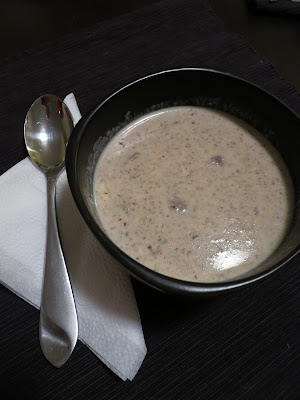 Bisque, laden with heavy cream, wine, butter and starch, isn't exactly a healthy meal. As such, people tend to save them for special occasions. To a forager, this might mean you wait to celebrate a large haul of choice mushrooms, like morels, porcini, or chanterelles. But I disagree! An event like that is a celebration enough, you don't need a rich soup to make it better. I prefer to use a bisque like this on the kind of haul I had this weekend--a haul of "meh" mushrooms: edible, but hardly choice, and not a whole lot of them. Your basic B grade mushrooms.

While out blueberry picking, I found amount of "meh" mushrooms. One small bolete (not one of the spectacular ones), a few chantrelles that were pretty dried out (from the heat and lack of rain we've been having), and a number of lactarius, or "milky-cap" mushrooms, mostly Lactarius voluminous, and one small Lactarius corrugis. All told, about 2 cups of wild mushrooms, once chopped.

The genus Lactarius, often called "milky-cap" or "milk-cap" mushrooms are a fairly safe group for a novice to experiment with. The genus as a whole is pretty easy to ID (they have attached gills, that may run slightly down the stem, and breaking these gills will release a "milky" liquid, called latex). Once you have confirmed that you have a Lactarius in North America, it won't kill you (provided you are a healthy adult), though there are many that will make you sick.

Well while I haven't been blogging, I have been continuing to experiment with wild foods. It's just that nothing has been earth-shattering enough to share. I mean, do we really need another wild greens pesto recipe? Or me telling you to boil a plant and serve it with olive oil and parmesan cheese? The thing is, I really want this to be as much a food blog as it is a foraging blog, and I really want the content to be both original and, (hopefully), exciting.