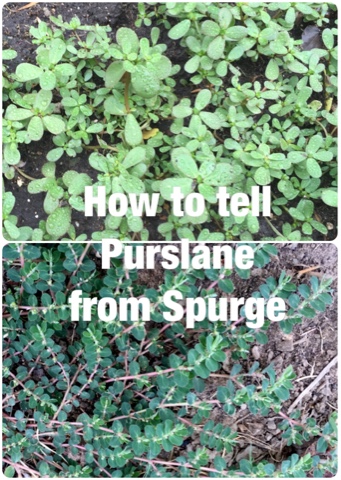 *As always you should never accept anything you read on the internet without verifying it for yourself with either a local expert or several publications. Colors can vary from monitor to monitor, and images are not as clear as in printed materials. Personally, before I eat anything I verify it with at least 3 reliable sources. I have found this to be a remarkably good way of ensuring my safety when foraging.

Euphobia is a pretty big genus, including poinsettias, which are also poisonous. Just as poinsettia can become a problem for house pets, spurges have caused deaths among sheep. If you have spurge in your yard, I would try pulling it out if you have young children or pets who go out unescorted.

Purslane is a non-native species in the Americas. (To be completely fair, there may be native varieties, but they have interbred and/or died out from competition with the ones brought over from the new world). Purslane is commonly considered to be an invasive species, but it's not. . .sort of. Invasive generally implies that the plant is doing active harm to the native environment/species. Eating, or just plain old destroying, invasive species is generally considered to be beneficial.

However purslane has been here so long that it's pretty much done whatever damage it's going to do. Like dandelion, it's very possible that purslane wiped out native species when it arrived, but the settlers weren't keeping track, so we really have no idea.

Eating a bunch of purslane, even wiping out a local patch or two isn't going to do any damage to your environment. (Provided you don't use chemicals, of course). Of course, I don't recommend eating something till you wipe it out, because then you don't have anymore. And, in my opinion, purslane is a very pretty plant, as well as a tasty one. And, given that it can and will grow everywhere, and spreads quickly and well, you can use it for a nice ground cover in areas you are having difficulty getting anything to grow. Purslane will grow from cuttings, so if you want to get rid of it, don't compost, and dig it up before it goes to seed. Kept in check, however purslane is apparently a good companion plant for gardens, and helps retain soil moisture.

Purslane is a great vegetable for anyone: forager, gardener or freegan. Unlike some wild plants which are bitter (and need to be boiled) or tough and stringy (and do best in a food processor), purslane has excellent flavor and texture, and can be prepared raw or cooked. The leaves, flowers and stems are all edible, (I have never heard of anyone eating the roots--so I would avoid them).

Raw, they have an juicy, crunchy texture. I would call it closest to celery, but without the stringiness. The flavor is somewhat sour, but with a tartness. Unlike lemony sorrel knotweed, I would call it a "green apple" flavor--but with a mellow grassy note. Many people describe the flavor as being somewhat salty, like a mild seaweed. I haven't found this, but I haven't gotten to eat purslane that much. Where I used to live, it was often only found by roadsides and parking lots--areas where you would risk ingesting dangerous chemicals. Use purslane raw in salads, on sandwiches, or on a foraged Crudités board, paired with a lambsquarters dip, a knotweed salsa, or garlic mustard horseradish!

When cooked, purslane looses much of it's unique texture, becoming soft like cooked spinach. If you cook it lightly, however, it makes an excellent substitute for pasta--like a thick spaghetti or an udon noodle. Purslane is naturally vegan and gluten free, but has mucilaginous aspect: like okra, purslane will release a sticky liquid when cooked. This "mucilage" can be used to thicken soups and stews, but if using purslane as a pasta substitute, you will need to rinse the veggie thoroughly and may need multiple changes of boiling water. Cooking purslane also removes much of the sour apple flavor, making it taste more like a spinach or other cooked pot-herb.

Other cultures around the world use purslane in baked goods, including semi-sweet applications. I haven't, but I'll let you know if I try.

I rarely get to talk about nutrition in wild plants, because the studies just haven't been done. But purslane has a long history of consumption, throughout the world, and we know a lot about what it has to offer.

Purslane is a nutritional powerhouse. Vegetarians and vegans especially will be excited to know that purslane has more heart-healthy omega-3 fatty acids than any other leafy vegetable plant. It's protein and iron concentrations are higher than in any cultivated vegetable--including kale. Purslane has more magnesium, vitamin A and vitamin E than kale as well. In a calorie to calorie comparison, it has more potassium than a banana. In addition there are some B vitamins, a good amount of vitamin C, a fair amount of calcium, and a smattering of those micronutrients people say we should get more of. . .(but generally don't tell us how!) All nutritional data has been gathered from the Wikipedia page.

Purslane has oxalates in it, similar to Japanese knotweed and wood sorrel. As we've mentioned before, many veggies you can buy in the store have oxalic acid, including spinach and rhubarb. People with kidney problems and/or rheumatoid arthritis should avoid these foods. The sick, the elderly, the very young and women who are pregnant or nursing should also avoid wild plants on general principle.
Posted by HenoftheWood at 5:00:00 AM