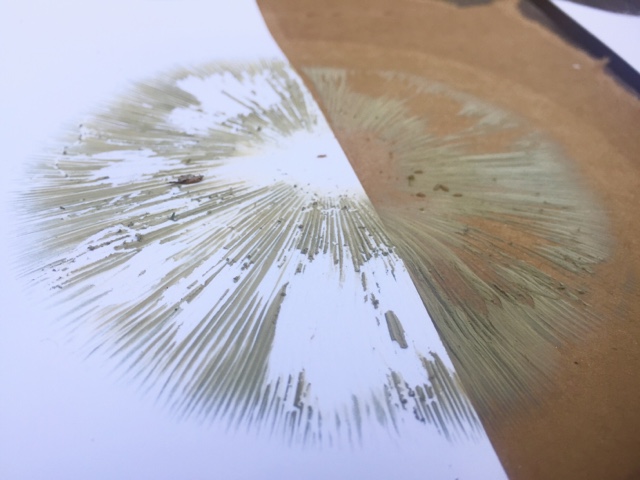 Hallo! So I ran a survey about 6 months ago, and I'm really really happy with the number of responses I got. To anyone who took it, thank you very much, I really appreciate the time you  put into helping me generate valuable content.

So the overwhelming thing people wanted to hear about was plant and mushroom identification. Another thing I got a lot of calls for were content more geared towards beginner and novice foragers.

One of the most foundational identification tools you'll need for wild mushrooms is knowing how to do a spore print. 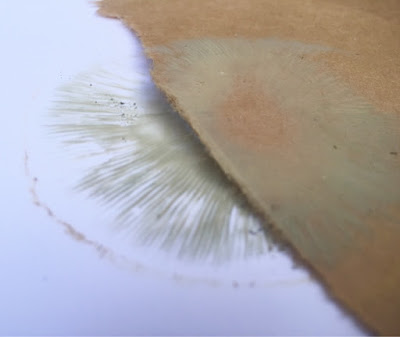 What is a spore print?

All mushrooms reproduce with spores. Spores can be considered to be like seeds, except they are tiny--individually invisible to the naked eye. (There are other differences as well, but they aren't really relevant to foraging).

Though we can't see individual spores, they do have a color, and when a lot of them are together, the masses of spores form patches of color, which can be seen with your eye. Sometimes these colors are distinctive, and are a necessary tool to help positively identify one mushroom from another.

Many mushrooms look similar, but have different colored spores, so discovering the colors of the spores is the key to differentiating the species. For example, edible Blewits look similar to potentially deadly Cortinarius, but Blewits have a salmon pink spore print, and Cortinarius have a rusty brown one.


Poisonous Chlorophyllum molybdites also called the green spored Lepiota (I have a full identification post here) have a sage green spore print, but the similar-looking, edible, Parasol mushroom has a white one.

Important note: A spore print is PART of a complete identification.  You CANNOT RELY ON A SPORE PRINT ALONE to identify a mushroom. Attempting to identify an edible mushroom from a spore print alone can result in sickness or death.

Making spore prints can also be a fun science project or craft for kids; one that get's them excited about the natural world.

I recommend doing spore prints outside wherever possible. Mushrooms can really shoot out their spores, and can get all over inside. 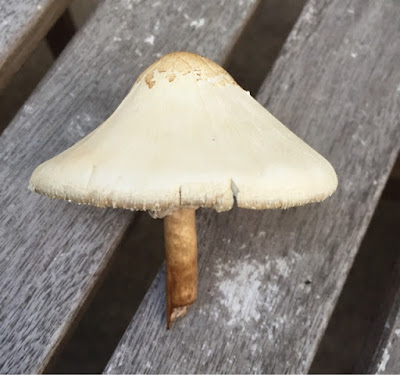 
The entire purpose of a mushroom's life is to drop it's spores. The mushroom is not "alive" per se, the actual organism, called mycelium, is tiny, and lives in the ground or in the wood. The mushroom is the "fruit" of the mycelium, and exists only to drop its "seeds" - the spores.

So an old mushroom will have already dropped the spores, and won't have any more to do a spore print. A very young mushroom won't be mature enough yet to have spores to drop.

It's best to pick a mushroom that's still firm to the touch, not mushy. It should be nearly flat, with the edges pointing slightly down. You can also try a younger mushroom with a  generally "mushroom" shape - called concave - like an umbrella. If the mushroom cap is completely flat, it might have already dropped it's spores. If the edges are angled up, it definitely will have dropped them.

Ideally the gill color will be white/light. This is another sign that the mushroom has yet to drop it's spores.

If you can, pick a couple or 3 mushrooms, in different ages/sizes. This will help ensure you get a good print. 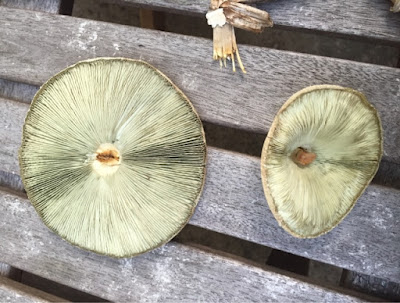 Step 2: Break off the stems so the mushrooms lay flat


The mushrooms I've chosen here are a little past their prime. I happen to know these are Chlorophyllum molybdites, a very common poisonous mushroom, and when perfectly young and fresh they will have clean white gills. The discoloration indicates that some spores have dropped and stained the gills. There are still plenty of spores left in these though! 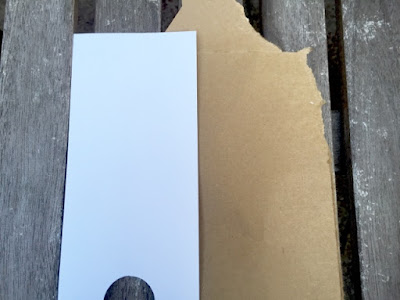 
Some mushrooms will have white spores, some will have purply/brown/black spores. Others will have every shade in between. If you only use white paper, you may not be able to see the lighter colors, so you want to have a piece of light paper and darker paper to rest your mushroom cap on. 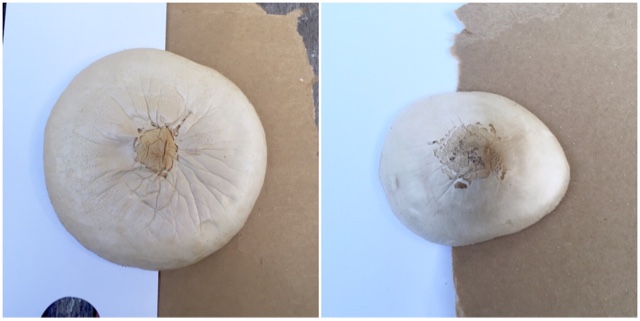 Step 4: Have your mushroom cap straddle the papers 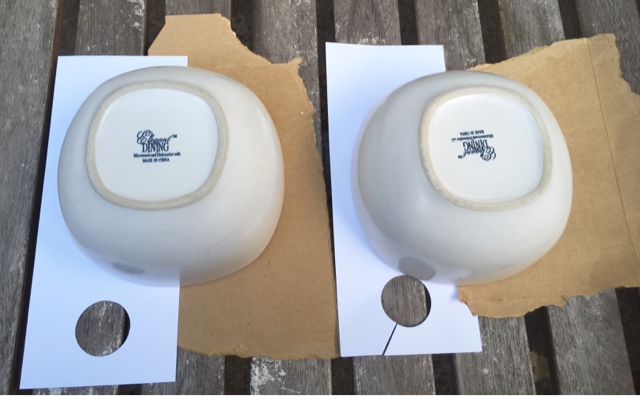 
Covering your mushrooms will help control the spore spread, especially if you're indoors, and prevent problems with animals or wind if you're outdoors. While not always an essential step, it will produce better results, and I recommend it. 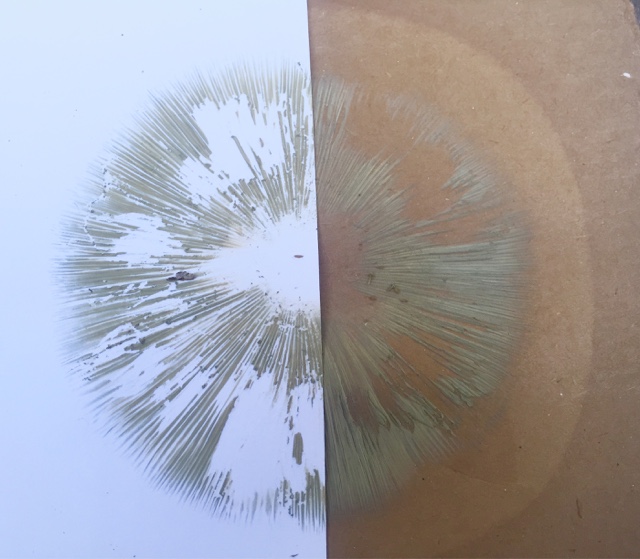 Step 6: Use your spore color to help ID your mushroom.


The sage green color of the spore print, when coupled with the size, color, shape, location and overall description of the mushroom confirms that these are, in fact,  Chlorophyllum molybdites. If someone encountered these in the wild, and thought that they were edible Parasol mushrooms, and eaten without doing a spore print, they would get very sick, and probably require hospitalization.

A light misting of hairspray, using several light coats from a distance of 8 inches or so, can preserve your spore print as art. You will want to cover it with glass within a day, because even sprayed, the print can be rubbed off. Plus it remains slightly sticky.

Important note: throughout the entire process, make sure to keep your mushroom out of the reach of young children and pets. Even edible mushrooms can be poisonous to animals, and can make children sick if consumed raw. Always have your and your children wash your hands thoroughly, and completely clean off the area where you do the spore print. Dispose of any paper contaminated by spores so that it won't be touched by children or pets. Wash the bowls thoroughly before re-use for food.

The myth of relying on gill color

So some people will say that a spore print is unnecessary because, as the spores drop naturally, they will stain the gills and you can just look at the gill color to ID a mushroom.

While this will work with some mushrooms, at some stages of their lives, overall it's just bad advice. Let's take these Chlorophyllum molybdites as an example. At the stage I harvested them, they were a bit "green about the gills" (ba dum boom  *ching*), but had I gotten to them younger, the gills would have been pristinely white. Without a spore print, they are a dead ringer for the Parasol mushroom - a choice edible. Many people have gotten sick this way.

Later in the life cycle of Chlorophyllum molybdites, the gills will turn dark grayish brown. The image below is one of the mushrooms I used for this spore print, the next day. The mushroom is still firm and fleshy, so it seems like it could be edible.

Brown spore prints are one of the signs of edible Agaricus species. To the inexperienced, a Chlorophyllum molybdites might resemble an Agaricus. By assuming that brown gills means brown spores, you could end up in the hospital. 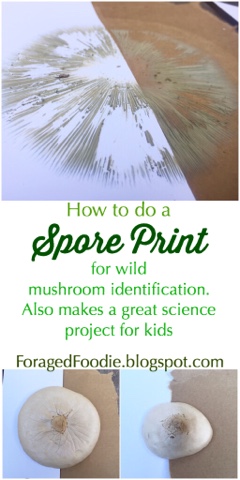 In conclusion, I hope you've found this content useful. As always, I hope my content has been really complete and concise, as well as helpful. Have a great Labor Day weekend!

SaveSave
Posted by HenoftheWood at 9:00:00 AM