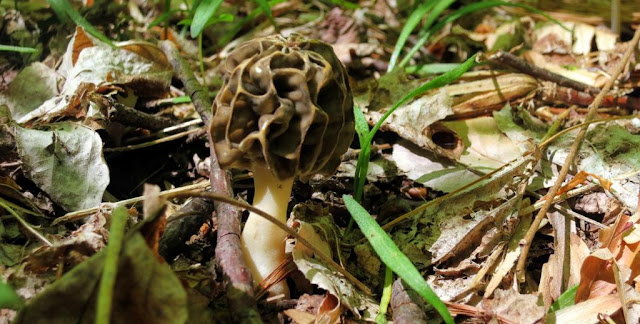 The mid-Spring season(April & May) is a great time to get into foraging in the Northeast US. Some of the most popular wild foods are at their peak right now, from the easy to find and ID dandelion, to the time for the famous, elusive morel mushroom.

Before I begin, I want to reiterate the ground-rules. Proper identification is the responsibility of the harvester. I am giving you clues and tips as to how I identify things, it is your job to confirm them with reliable sources to your own satisfaction. If you are ever in the slightest doubt about a plant or mushroom--don't eat it. Also, don't harvest edibles from areas that may be contaminated. This would include areas that may have been exposed to pestasides, fungasides and weed-killers, areas near highways or busy streets, areas that may have had industrial or chemical run-off, and areas frequently trafficked by people walking their dogs. Finally, this guide is for Spring (April & May) in the Northeast, only! That is to say, New England and the Mid-Atlantic states, and north to Ontario and Quebec in Canada. What grows in your spring might be totally different. Even in the Northeast, remember to factor in "early" and "late" spring conditions.

So without further ado, I present: 9 popular wild edibles of Mid-Spring! 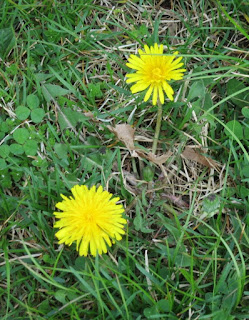 1. Dandelion.
Dandelion's have to be the easiest wild edible to both find and identify. Everyone knows them from childhood on, and there cheery yellow color makes them easy to spot. Dandelions are nutritional power-houses, superfoods! Every part of the plant is edible, though some are more flavorful than others. The root, especially, is very bitter and rarely used. The greens are bitter, but in the spring the younger, more tender leaves are less so that the mature summer leaves. Mix them with other greens either raw in a salad, or cooked as a pot-herb. Probably everyone's favorite part of the dandelion is the flower--which is at it's peak in April and May. It is much sweeter than the greens, just make sure to remove the green "base" which is very bitter, and use only the yellow and white portions. Check out my Dandelion Pinterest Board for recipes from all over the internet.

Garlic mustard (Alliaria petiolata) is a non-native, invasive species that's
everywhere. The plant lives for 2 years, and the second-year plant becomes very easy to ID in May, when it shoots up and flowers. The leaves are fan-shaped to hear-shaped, the shoots range from 1' - 3' high, and the flowers are small, clustered, and each has 4 petals. The edible portions are the leaves and the root. Many people complain about the bitterness of the leaves, but I have found that this is based entirely on where they are harvested. Take only plants from rich soil, and full or partial shade. Plants growing in poor soil or in full sun will be much more bitter. Harvested correctly, garlic mustard leaves are only slightly bitter (much less than that of dandelion or plantain), and have a nice garlic-y flavor. The root is pungent, and mixed with vinegar makes a great substitute for horseradish, or even wasabi. Check out my Garlic Mustard Pinterest Board for recipes from all over the internet. 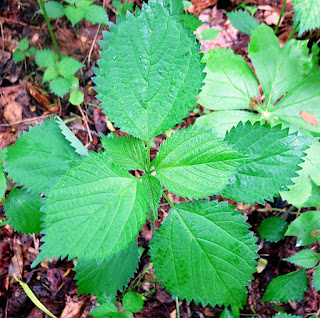 Nettles rival dandelions as the most commonly collected wild edible. Like dandelions, they are also superfoods--being rich in both vitamins and calcium! There are 2 kinds of nettles which are commonly eaten--the wood nettle (which is native to the US) and the stinging nettle (which came over with the European settlers). Despite the name, both nettles sting. Young shoots are harvested in the spring; stinging nettle is leafy, and used more as a pot-herb, and wood nettle is tall and mostly stalk, used as a shoot veggie. May is ideal, because both are in season (stinging nettles come in in April, and run through May, wood nettles come in in May and run through June). Check out my Nettles Pinterest Board for recipes from all over the internet.

4. Japanese Knotweed.
Knotweed is another non-native, invasive species. It is most commonly found on riverbanks, in flood planes, or in disturbed-ground environments. Making its debut in early April, the season for knotweed is mostly passed by May, but tender portions of the larger stalks can still be used--if they are peeled. Or, if you have a large patch, cut it down, and it will regrow and be ready for harvest in 7-10 days. By doing this, you can enjoy knotweed all through the summer. Knotweed, which tastes like lemony celery, is also the key ingredient in commercially sold resveratrol, an anti-oxidant. Check out How I ID Knotweed and my Japanese Knotweed Pinterest Board for recipes from around the web.


5. Burdock (Gobo).
Burdock, (Arctium minus) is frequently sold in Asian markets and health food stores as Gobo. The plant has large leaves (6" to 16"), in a rich green, sometimes with burgundy colors on the petioles (leaf stems). The leaves are shaped like elongated hearts and have slightly ruffled edges with silvery undersides. They grow in "basal rosette", which is to say, a cluster of leaves laying on the ground, which come from a common root. Burdock has several edible parts, but what you want in May is the root, which can be quite long (up to 3 feet!), and will require a shovel to harvest--not a trowel. Harvest the root before the flowering stalk shoots up--once the plant has begun to flower, the root will be tough and flavorless. The root should be sliced thinly, and cooked long and slow. When done, it will be soft and have a delicate, artichoke flavor. It also has medicinal properties, it helps detoxify your body and purify your liver. Check out my Burdock Pinterest Board for the web's best recipes.


6. Dryad's Saddle Mushroom.
Polyporus squamosus (the Latin name), known regionally as the Dryad's Saddle, Hawk's Wing, Scaly Polypore, or Pheasant's Back (and probably more), is a nice consolation prize for unsuccessful morel hunters. It fruits about the same time of year, and in the same hardwood forests, on dead or dying trees. Dryad's Saddle mushrooms are fan-shaped "shelves" which always grows on wood, and have pores under the surface of the cap--not gills (Some gilled mushrooms growing on wood can make you sick or kill you). The top has gradients of beige, gold and brown, and can run from light on the edge to dark on the inside, or dark all around and light in the middle (like these). There are dark brown triangular scales on the cap. Mushrooms that look like this, called polypores, are a generally pretty safe group, but always double check your ID.


7. Ramps.
Allium tricoccum, commonly called Ramps, or wild leeks, are either abundant or elusive, depending on wether or not you are lucky enough to find them.

Ramps are prone to over-picking, and especially at risk from commerical picking. Check out my guide for finding and sustainably harvesting ramps.

Though they pop up in April, (and who can resist having a few when they appear), try to hold off the majority of your harvest until till May. This gives the plant longer to photosynthesize--to gather more energy--which gives it a better chance of surviving the winter and having energy enough to reproduce. Once the trees above leaf out, the ramp leaves will die back anyway, so you by waiting to forage the leaves, your impact on the plant becomes negligible. For recipes from all over the web, check out my Ramps Pinterest page.


8. Fiddlehead Ferns.
Despite the common assumption, not all ferns which make a "fiddlehead" are actually edible. Though as far as I know no ferns in this area are deadly, many will make you sick. The ostrich fern (Matteuccia struthiopteris) is considered "the" gormet fiddlehead. (Though the braken fern is widely consumed, it may actually be carcinogenic). I have had no luck finding ostrich fern fiddleheads myself, so I would like to direct you to this great resource from the University of Maine, with IDs and sustainable harvesting tips. Fiddlehead Ferns from the University of Maine.

9. Morel Mushrooms.
(Morchella species) The holy grail of springtime foraging, we didn't find any till we went out with our local  mycology club. Morels are elusive, both in that they are so particular about the conditions where they will fruit, but also in that they blend so well with the leaf litter and debris  where they grow.

With the NJMA (New Jersey Mycological Association), we learned that Northeastern morels most often fruit with Elms or Tulip poplar trees. This is because the mushrooms are mycorrhizal (symbiotic) with these species of trees. In addition, moisture, temperature, and ground PH all play factors in when and if morels will fruit.

Using Spring's clues to reap Summer & Fall harvests
Spring is a great time to practice what I like call "foraging divination", where clues you gather in the spring predict what you will be able to find in the summer and fall. It's really all about being observant and aware of your surroundings--and it can really pay off! One great way to "predict the future" of your foraging season is to pay attention to the trees, and not just the trees you are looking for for morels. Noticing large stands of well-established oaks won't help you now, but in autumn, you will know where to go for hen-of-the-woods (a parasitic mushroom which prefers oak woods) and acorns.

In spring, before the tree leaves unfurl and the underbrush really starts to develop, look carefully around you. You may see things that will be hidden by foliage later in the year. I was able to spot this old chicken mushroom (one of many I have found this way) deep in the woods, far off from the trail. Later in the year, when it is actually fruiting, it would be completely hidden by underbrush--in fact, I had come by this way many times and never seen it. By finding its "corpse" in the spring, now I know where to go off the trail to check in the summer and early fall for this season's fruiting.

Finally, some flowers now will become fruit later. The Mayapple (whose leaves, stem and root are deadly poisonous) flowers in May, but the edible fruit (seeds are not edible--don't eat them) doesn't ripen till August. By the time the fruit is ripe, Mayapple leaves and stems have died back, and finding the fruit becomes very difficult. By noticing the location of dense patches of Mayapples now, you can return in a few months for your summer harvest.