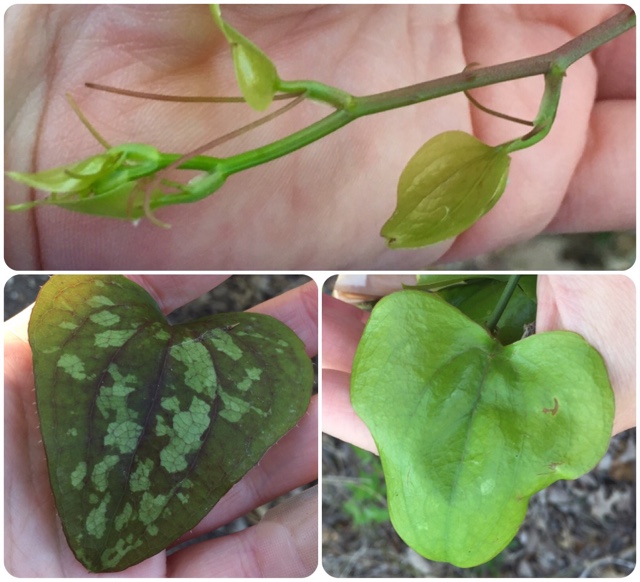 Smilax species, often called greenbriars, bullbriars, or catbriars, are a plant not often addressed in foraging circles, and I'm not sure why. Maybe because identification, while actually pretty easy, seems so complicated at first.

I was scared to eat greenbriar too; I had tried it when in the company of more experienced foragers, but unwilling to forage it on my own.

After all, it has over 300 varieties, with a wide array of leaf shapes, colors and mottling. Leaves are a big part of identification, and it's easy to get distracted by the differences. And then there's the berries, which can be dramatically different too: red, blue, black, hanging in clusters like grapes or in pairs or globes! Finally, there are so many dangerous vines to look out for, it just seemed like too much risk to  take.

Well after spending a little time with the plant, which grows abundantly in Texas, I'm pleased to say that greenbriar are actually a very easy ID.  Yes, the leaves of different varieties look different from each other, but they do have key similarities, and leaf shape is only a secondary element to identification.

As always, please read the disclaimer before using these tips to identification.

Smilax is a rite of spring in the Black Sea region, like Turkey and Georgia (the country). It was also used in Central and South America to enhance male libido. Early European settlers brewed a drink from the roots, early sarsaparilla, and used it not only as an aphrodisiac, but also to treat genital diseases, like syphilis. I would seriously doubt it's effectiveness on STDs, but I'll leave amorous experimentation up to you.

Greenbriar is a vine which can send up shoots that will "stand" upright on their own for as long as 3 feet, however it is more often found climbing other vines, trees or plants.


The leaves can be heart-shaped, spade-shaped, triangular, indented triangles, oval or nearly lanceolate (lance-shaped). Whew. They can also be solid bright green, light green, olive green, mottled dark and light green, or emerald green, and they can be super shiny or rather matte. So neither leaf shape, nor color is an essential feature.

One thing that all the leaves have in common, and IS an great ID feature, is that they are all "palmately veined". That is to say that the main veins on every leaf will all come out from a central point, located where the leaf meets the leaf stem (called the petiole). If you look at all these pictures, you will see that no main veins start on another vein, this is an important ID tip.

If you think of the way the leaves of a palm tree all come off the trunk at one point, that will give you the idea. . .and the origin of the word.


The most important identification feature for Smilax species is that they are the only North American vines (and possibly in the rest of the world--but I can't vouch for that) to have both thorns AND tendrils. So if you think you've found a greenbriar, trace it back on the vine until you can see both a thorn and a tendril. That plus the palmate venation is a sure-fire hit. If you can trace the vine back, it's easy to identify Smilax.


Finding greenbriar in the wild

Greenbriars like a lot of water, and will most often be found near creeks. They can also thrive in drainage culverts, but if you find them there take care of the run-off and other pollutants they may be exposed to. They also prefer partial to deep shade, so the best places to find them are in the flood planes of woodland streams. One of the things that I always notice first about greenbriar is that the ends of the young vines, the parts that are actively growing, will OFTEN (but not always) have young leaves that remind me of lobster claws -- they form a very pointed, claw-like tip (though not sharp).


The very end of the new growth has a distinctly bug-like shape, that's really hard to describe. It's best to simply familiarize yourself with some pictures, like the ones I've shared above.

However, it's important to note that other, potentially toxic vines have a similar end-tip shape--so don't use this as your only ID feature. Rather it's a good way to get used to spotting the plant in the wild.

Because of their thorns, greenbriars are considered an annoyance in many places. Lots of hiking trails will cut them back viciously, and when that happens the "stump" of the vine will send up the fattest, longest, thickest, most lucious new growth you are likely to see.

The part of the plant I eat is the tender new growth, both vines and very young leaves. This growth will be bright or light green, and look somewhat translucent or "juicy" when compared with the rest of the vine. They will also often be shiny.

Once you find the tender tip, and trace the vine back to confirm that it has both tendrils and thorns, find the place where the tender portion naturally "snaps" off of the main vine. Anything that snaps off easily with a bend is the tender new growth, and can be eaten.

Eaten raw, I find that most greenbriars have a strong, sharp sourness, much more so than wood sorrel or Japanese knotweed. Many varieties have an unpleasant "swamp water" taste and smell too, though wether this is solely based on the variety or if where it grows plays a factor, I'm not sure. Either way, I don't really care for them raw.

I have boiled greenbriar, and when fully cooked it will loose that "swamp water" taste (though a hint of the aroma may linger), and they taste very similar to green beans. Some vines will keep a bit of stringiness, but most will be quite tender.

If you cut them up finely, greenbriar can be caramelized as you would onion, but because of the high water content it can take a LONG time to get them the way you like. Still, prepared this way they taste quite good, and retain a hint of the tangy sourness, but not the "swamp water".  Actually something about the "swamp water" flavor comes across as almost like a dill or pickle flavor, when they are caramelized.

When not well cooked, specifically boiled, greenbriar gives me a good deal of gas. It also seems to have a mild laxative effect, I find myself going 2-3 times a day when I eat it regularly. Of course, these effects could just be me.

Greenbriar roots, and the fruit of the berries (not the seeds) are supposedly edible. I have not yet tried either. Remember that harvesting the root will kill the plant, and also that the seeds are an important winter food source for birds and wildlife. That's not to say you can't sustainably harvest both, just remember to do so in moderation, and only where the plant is very abundant.

If you harvest the tender new growth, as I do, it will grow back. Still, it takes energy from the roots to  make this new growth, so if you don't want to slowly deplete the roots (and kill the plant), only harvest from each vine once per year.

Left unchecked, greenbriars can completely overwhelm trees and plants, choking them off from the sun and eventually killing them. As I mentioned earlier, some places will cut the plant back quite vehemently, yet it always seems to come back, so I'm not sure how careful you need to be about sustainability. Still, without any scientific evidence, it's best to always practice sustainable foraging.

Greenbriars are native to North America, and thus aren't an invasive, however some individual varieties might be.

Greenbriar in the late summer and fall 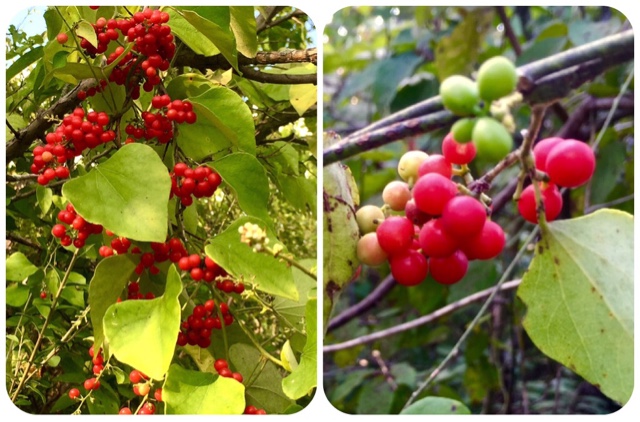 If you find greenbriar in the fall, you'll have missed out on those tasty shoots. But you can mark the area to come back in the spring.  Look out for clusters of berries, either bright red or matte blue-black. They will hang off the central vine, in almost a grape-like way.  Sometimes the clusters are nearly spherical.

The fruits are edible, but make sure you ID the vine using the same check for both briar AND tendril. Many fall berries, especially red ones, are poisonous, and potentially lethal. You must ID using all the features: leaf shape, veins and especially briars and tendrils.
Honestly, there is very little to the fruit, it's mostly seed, and there is nothing interesting to the flavor. They are also an important source of winter nutrients for birds and small mammals, so I recommend leaving them alone.

English Ivy
Many, if not most vines you'll encounter while foraging are poisonous. The most common two are English Ivy, of which there are several varieties, and poison ivy. 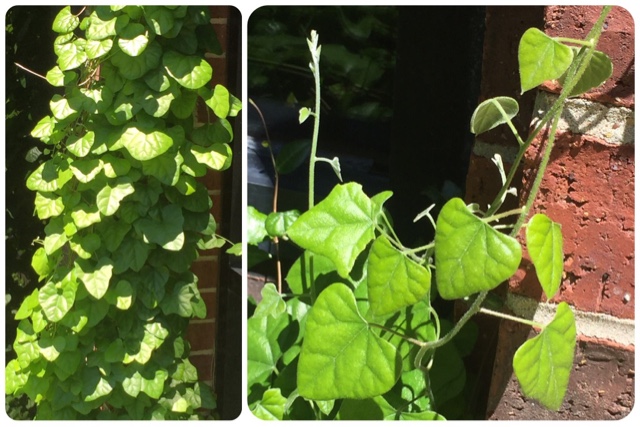 English ivy is an introduced invasive species most often found in or near buildings, as it was once used in landscaping. Though non-native to the Americas, English ivy is so prevalent that it's often called common ivy. I bet when I even say the word ivy, it's An image of English ivy that pops into your head.

But, while English ivy vines will form tendrils, they never have thorns - so make sure you check for the thorns of Smilax/Greenbriar.

It's pretty unlikely that anyone would mistake poison ivy with Smilax/greenbriar. Poison ivy features a compound leaf--which is to say that every leaf is made up of 3 leaflets. The veination on poison ivy leaflets is also different: see how there is one long vein down the center, and all the other veins branch off of it? That's called pinnate veins, very different from the palmate veins of Smilax/greenbriar.

But one important thing to remember about poison ivy is shared habitat. Both Smilax/greenbriar and poison ivy like to spiral around trees and other plants - I've even seen them wrapped around each other! In this picture below, the bright green vine of Smilax is growing up right mixed in with tons of poison ivy vines. Always be 100% careful not only of what you are harvesting, but also that it hasn't come in contact with anything poisonous!
Posted by HenoftheWood at 8:00:00 AM 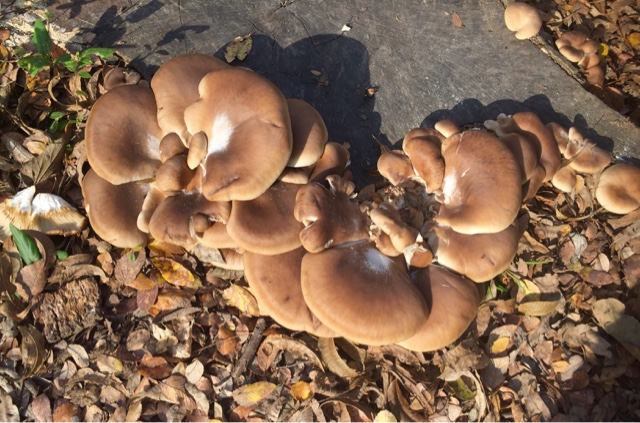